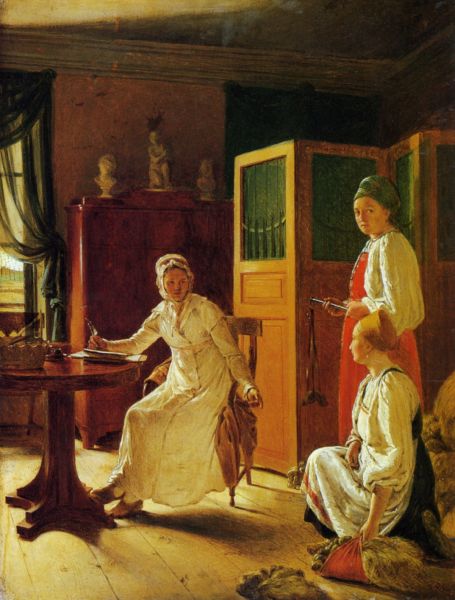 This picture depicts a landowner’s wife giving peasant women flax for spinning in winter, suggesting that it was painted in either late autumn or early winter. On 15 March 1824, Alexei Venetsianov presented the painting to Empress Elizabeth Alexeyevna, wife of Tsar Alexander I (1801–25), for which he was awarded a diamond signet ring. The artist’s own title for the work was Landowner’s Wife Giving Flax to Peasant Women. Later, in the literature, it became known as Morning of a Landowner’s Wife or Landowner's Wife Engaged in Housekeeping. The painting is traditionally considered to depict the artist’s wife Martha in a room in their house in Safonkovo in Tver Province. A. N. Savinov believes that the image of the landowner’s wife was inspired by M. M. Filosofova. The picture is one of the most important in the oeuvre of Alexei Venetsianov. It is virtually the artist’s only work in which he depicts the nobility coming into contact with the world of the peasantry. Soviet art historians condemned the “incorrect" and idyllic relationship between the landowner's wife and her serfs, complaining at the artist’s failure to show the “trials and horrors of the peasant class.” Venetsianov depicts an everyday scene, which in his interpretation acquires a profound significance. It seems to be something more important than a typical image of the distribution of flax. Flooded with light, the atmosphere of the room in the manorial house is calm and quiet. The figures of the two peasant women are graceful and dignified. Wearing a housecoat and a cap, the landowner’s wife sits at a table, immersed in the shadows. The sunlight only falls on the silhouette of her figure, suggesting that the real heroines of this work are the two peasant women.

Venetsianov, Alexei Gavrilovich
1780, Moscow - 1847, Poddubie (Tver Province)
Founding father of Russian peasant genre painting. Painter, portraitist, etcher, lithographer. Son of a Moscow merchant, educated at private boarding school, worked as a draughtsman. Moved to St Petersburg (1802) and worked as a land surveyor for the crown properties and forestry departments. Studied painting independently, copied works in the Imperial Hermitage and drew pastel portraits. Academician (1811). Resigned from the civil service, moved to the country and painted genre scenes from life (early 1820s). Exhibited at the Imperial Academy of Arts and the Society for the Encouragement of Artists. Had many students, who formed the Venetsianov school in Russian art. Killed in a road accident at the Milyukov estate.