Underground Worker with a Drill. 1937 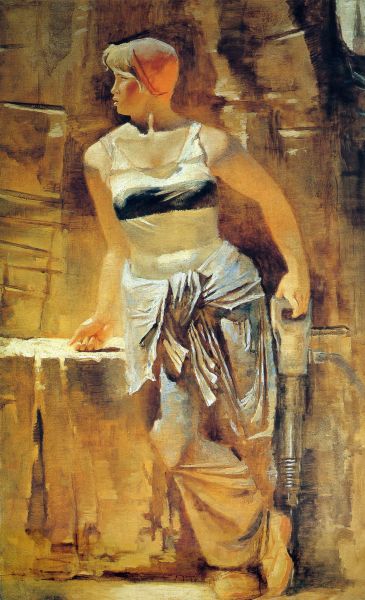 Endowed with a sharp feeling of modernity, Alexander Samokhvalov aspired to be in the epicenter of life, discerning the romantic pathos of creation in the leading events of the day and age. Construction of an underground railway in the mid-1930s was an exciting new topic, discussed at length across the country and even lauded in popular songs. Samokhvalov long dreamt of depicting the female construction workers in a monumental mural. In 1937, he painted an oil painting on the basis of an earlier watercolour.
The large generalised planes and laconic tones help the artist to achieve a monumental plastic image. This fresco-like portrait exudes strength, clarity, beauty, mental and physical health, inspiration and aspiration. Alexander Deineka characterised the heroine of Underground Worker with a Drill as “like a goddess, yet nevertheless our own Russian gal.” Samokhvalov was clearly orientated on classical art. The worker’s athletic figure, posture, crossed legs and the drapery liken her to a Greek or Roman goddess. Working on his “underground workers” and focussing on frescoes, Samokhvalov passed through a period of interest in Michelangelo, whom he regarded as a “truly great revolutionary artist, whose works realized the ideal of democracy — the harmony of the power of the spirit and the power of the body.” The “new man” in the image of Soviet womanhood was a popular theme in the art of the 1930s.