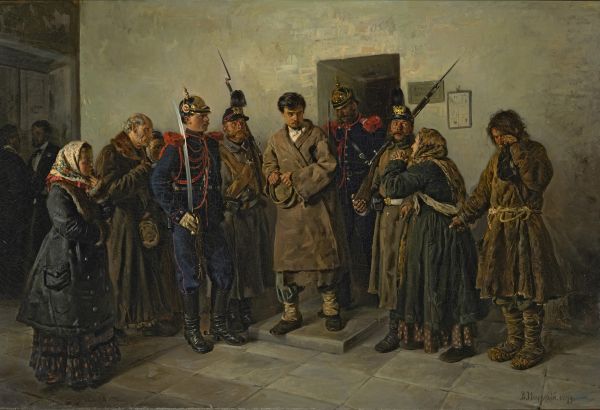 This picture is typical of the oeuvre of Vladimir Makovsky in the 1870s. Besides painting genre scenes reflecting the lives of the common people, the artist also addressed political and social problems. In the mid-1870s, there was a national movement in Russia known as narodnichestvo or “going to the people”. In the spring of 1874, members of the urban intelligentsia left the cities for the villages, going among the people to teach the peasantry their moral imperative to revolt. They found almost no popular support, however, and the movement was an unmitigated failure.
Like llya Repin, Vladimir Makovsky often addressed the image of Russian revolutionaries in the 1870s. Scenes of arrests, imprisonment and exile provided rich material for creative concepts and psychological dramas. In this particular work, the artist attempts to convey both the convict’s sufferings and his unbroken spirit, employing the traditional devices of genre painting to portray a positive hero.