Gerard de la Barthe. View onto Moscow from the Balcony of the Kremlin Palace in the Direction of the Moskvoretsky Bridge. 1797 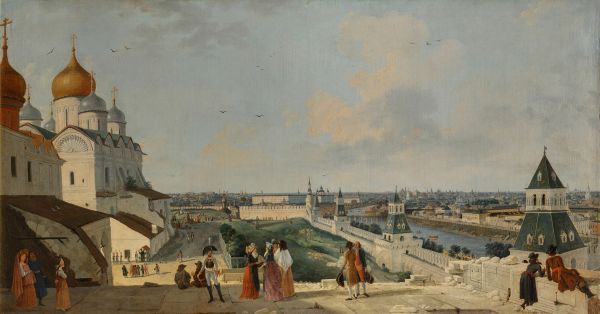 This work depicts the view onto Moscow from the highest point of the Kremlin Hill. The white wall and towers of the ancient citadel are depicted in close-up. The Kremlin cathedrals can be seen on the left. Although the architectural ensemble of the Kremlin was already in place by the 1330s, it was rebuilt on a number of occasions, following fires and wars. The blocks of white stone at the wall on the right show that reconstruction of the Kremlin Hill continued even in the late eighteenth century. The building in the background is the Foundling Hospital, opened by Catherine the Great under the influence of the humanitarian ideas of the Enlightenment.