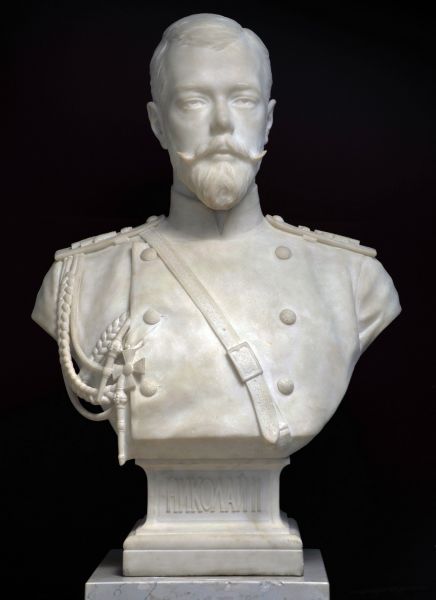 Nicholas II was the last Emperor of Russia and the son of Emperor Alexander III and Empress Marie Feodorovna, née Princess Dagmar of Denmark. He ascended to the throne on 20 October 1894. His reign was characterised by rapid economic growth and the acute worsening of the country’s socio-political situation, all of which took place against a background of industrial modernisation and agrarian reform. The State Duma was also established during this time. At the same time, culture flourished, and this era came to be known as the Silver Age of Russian artistic culture. The emperor’s mild character was not conducive to creating an image of a strong state identity. The weakening of the monarchy’s power occurred at the same time as some serious shocks: the Russo-Japanese War (1904–1905), the First World War (1914–1918) and the revolutions of 1905–1907 and 1917. On 2/15 March 1917, the emperor abdicated the throne. That summer, he was sent to Tobolsk and then taken to Ekaterinburg. On the night of 16 July 1918, he was shot with his family in a house belonging to the engineer Nikolai Ipatyev. In 1998, his remains were reinterred in St Petersburg in the Peter and Paul Cathedral. On 20 August 2000, the Russian Orthodox Church canonised the emperor and his family as martyrs.

These marble busts of the imperial couple, Nicholas and Alexandra, were done by Mark Antokolsky in Paris. They turned out well and were remade several times by the artist, not only in marble, but also in bronze. The portrait of Alexandra Feodorovna is distinguished by a special expressiveness, where the technical perfection of the execution is combined with the beauty of the model herself and the rare poignancy of the image, which borders on prophetic foresight of the empress’s tragic fate.

The sculptor Mark Antokolsky moved to St Petersburg in 1862, where he studied under Nikolai Pimenov and Johann Reymers at the Imperial Academy of Arts. In 1871 he started work on his sculpture of Ivan the Terrible (plaster, Kensington Museum, London). During the early 1870s he lived in Italy, before moving to France in 1877, although he visited Russia every year. Antokolsky was awarded a gold medal and Légion d’honneur at the Exposition Universelle, Paris in 1878 and was later made a professor, then full member of the Imperial Academy of Arts, where he held solo exhibitions in 1880 and 1893. He was also an honorary member of Académie des Beaux-Arts in Paris, Akademie der Künste in Berlin and Accademia di Belle Arti in Urbino.