1881 Campaign Against the Tekke Turkomans. The Battle of Geok Tepe. 1889 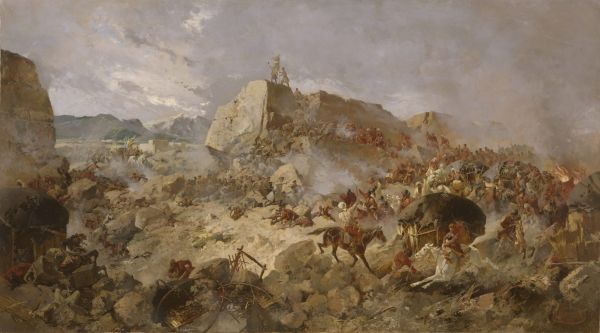 During Alexander II’s reign, Russia, in opposition to England, led an active policy of conquest in Central Asia. In 1880–1881, the Russian army carried out what is known as the Akhal-Tekke Operation against the Tekke tribes, made up of farmers, ranchers, and great warriors. It was led by General Mikhail Skobelev. Around noon on 12 January 1881, they blew up the eastern wall of the strong fortress of Geok Tepe, which was protected by 25,000 defenders. Russian troops moved through the resulting passage, suppressing the enemies’ resistance, and soon captured the fortress. In the painting by the battle painter Nikolai Karazin, who visited the site of the battle, the final moments of the battle are shown. The Turkomans are still resisting, but the banner of victory is hoisted on the fortress wall already.

Karazin, Nikolai Nikolayevich
1842, Novo-BorisoglebskayaSloboda (Kharkiv Province) – 1908, Gatchina (near St Petersburg)
Painter, draughtsman, writer. Graduated from the Second Military Academy in Moscow (1861). Served in the Russian Army (1862–1871), participated in the Central Asian campaigns. Studied under Bogdan Gottfried Willewalde at the Imperial Academy of Arts (1865–1867) and under Gustave Doré and FirminGillot in Paris (early 1870s). Illustrated St Petersburg’s magazines (from 1871), a war correspondent for the magazine World Illustration (1876–1878). Accompanied expeditions of the Russian Geographical Society to Central Asia (1874, 1879). Travelled across India (1890–1891). Academician (1907). Contributed to the exhibitions of the Imperial Academy of Arts, Society of Russian Watercolourists and the St Petersburg Society of Artists (from 1881). Held one-man shows in St Petersburg (1874), Paris (1880) and London (1880).