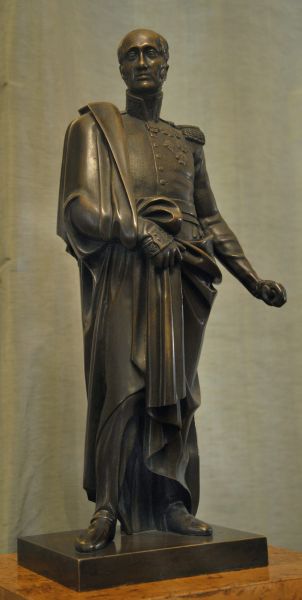 Mikhail Golenishchev-Kutuzov (1745–1813) took part in the Russo-Turkish wars during the reign of Catherine the Great, and during these he was critically injured twice and lost an eye. In August 1912, he became the commander of Russian forces in the fight against Napoleon’s army. After the Battle of Borodino, he left Moscow. After subsequently driving the enemy out of Russia, Kutuzov was granted the rank of Field Marshal, the title of Prince of Smolensk, and the Order of St George, First Class, becoming its first full cavalier. In 1813, he led the unified Russo-Prussian forces. After Kutuzov’s death, the commander of the unified army was Michael Andreas Barclay de Tolly, who for his heroism in battles at Kulm and Leipzig received the Order of St George, First Class and the title of count, the rank of General Field Marshal in 1814, and a princely title in 1815.
The idea of building monuments originated in 1818, when the corresponding decree was signed by Alexander I. After his victory in the design competition (1829), Boris Orlovsky, who had returned from Italy, where he worked in Bertel Thorvaldsen’s studio, received the order to create statues of the military leaders. Following the new tastes in Western sculpture, the two field marshals were depicted in modern military uniforms, rather than imaginary garments. The realistic portrayals of people in monuments and their historical accuracy marked an important stage in the development of Russian monumental art. The ceremonial unveiling took place on 25 December 1837.

Orlovsky (Smirnov), Boris Ivanovich
1797, Bolshoe Stolobetshoe (Oryol Province) - 1837, St Petersburg
Sculptor. Studied under Carlo Antonio Campioni in Moscow (1807-17) and Alessandro Triscornia in St Petersburg (1818-22). Freed from serfdom for his marble bust of Tsar Alexander I (1822). Awarded a fellowship to Italy (1823). Studied under Bertal Thorvaldsen in Rome (1823-29). Returned to St Petersburg. Designed statues of Mikhail Kutuzov and Mikhail Barclay-de-Tolly in front of the Kazan Cathedral (1829-37). Sculpted the angel for the Alexander Column on Palace Square (1832-33) and decorated the Moscow Triumphal Gates (1835-37). Taught at the Imperial Academy of Arts. Academician (1831), second-class professor (1836).