Scene from the Time of Troubles (The Saving of Maryna Mniszech During the Uprising Against the Poles in Moscow on 17 May 1606). 1850s 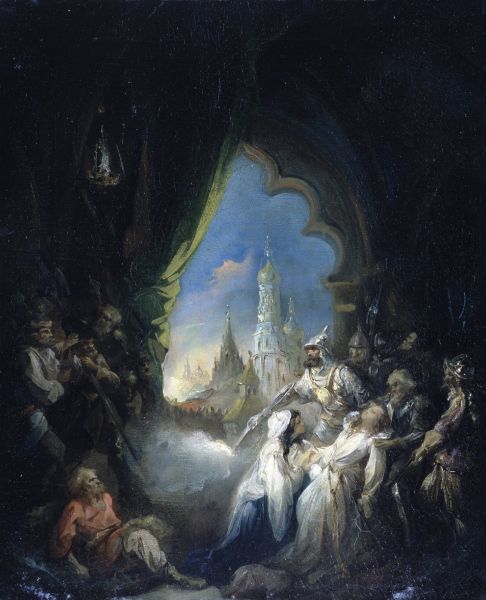 On 3 May 1606 Maryna Mniszech, who was betrothed to False Dimitry I, entered Moscow with great ceremony. Her carriage stopped by the Monastery of the Ascension in the Kremlin, where the bride was welcomed by a nun, Tsarina Marfa (Maria Nagaya before she became a nun), the mother of Tsarevich Dimitry, who had allegedly accepted False Dimitry I as her son. The marriage and coronation of Maryna and False Dimitry I took place five days later. However, on the morning of 17 May the tocsin began ringing, announcing an uprising. Hearing that her husband was dead, the half-dressed Maryna dashed out into the hall and then ran across into rooms where she hid under the ample skirts of the Chief Lady-in-Waiting. Maryna’s faithful servant met the plotters sword in hand and held off the press of the crowd for a long time. Boyars soon arrived and drove the crowd away, and then placed a guard for the women. Nikolai Lomtev’s painting, which is done with a free brush and is full of romantic expressiveness, records the culminating moment in the fight for the life of the Polish adventuress as she falls unconscious into the arms of her servants.

Lomtev, Nikolai Petrovich
1817, Rostov Veliky (?) – 1859, St Petersburg
History and genre painter. Son of a third-class merchant. Occasional student at the Imperial Academy of Arts (from 1837), studied under Fyodor (Fidelio) Bruni. Perfected his art in Italy thanks to the financial support of his father (late 1838). Enjoyed the advice of Fyodor (Fidelio) Bruni, who was in Rome at the time, was on friendly terms with Alexander Ivanov. Completed and submitted Angels Informing Sodom and Gomorrah About the Celestial Punishment to the Imperial Academy of Arts (1845), awarded the title of non-class artist on 13November. Returned to St Petersburg (1848). Painted on commissions, painted icons for a monastery near Tambov (1848–1850). Worked in Ukraine (1858).