Fire in the Countryside. Late 1870s 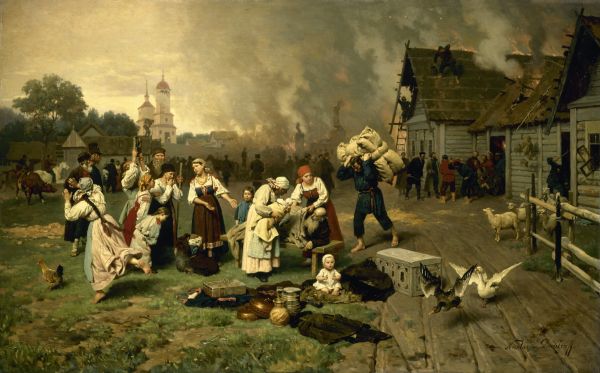 Themes connected with the everyday life always interested the artist. In an effort to draw public attention to the hardships of peasant life, he often turned to depictions of its sorrowful sides. The subject of fires in the countryside was popular in Russian painting in the nineteenth century. Many artists turned to this subject. Despite the importance of the narrative in the treatment of the subject, the artist introduces details of ethnographic and historical character to the canvas that corre¬spond to the reality of those years (peasant clothing, dishes and the cabinet, prototypes of which are now in the Russian Museum s collection).

DMITRIEV-ORENBURGSKY, Nikolai Dmitrievich
1838, Nizhny Novgorod - 1898, St Petersburg
Painter, genre artist, painter of battle-pieces. Studied under Fyodor Bruni at the Imperial Academy of Arts (1856). One of the rebellious fourteen (1863) and the St Petersburg Artel of Artists (until 1870). Academician (1868). Contributed to exhibitions (from 1860). Contributed to the exhibitions of the Imperial Academy of Arts and the Society of Russian Water-Colour Painters. Accompanied Grand Duke Nikolai Nikolaevich the Elder on his trip across the Caucasus and compiled an album of drawings (1869). Fellow of the Imperial Academy of Arts in Germany (1871–1873), where he enjoyed the advice of Ludwig Knaus. Lived in Paris (1877–1884), visited Belgium and Bulgaria. Pro-fessor (from 1883).