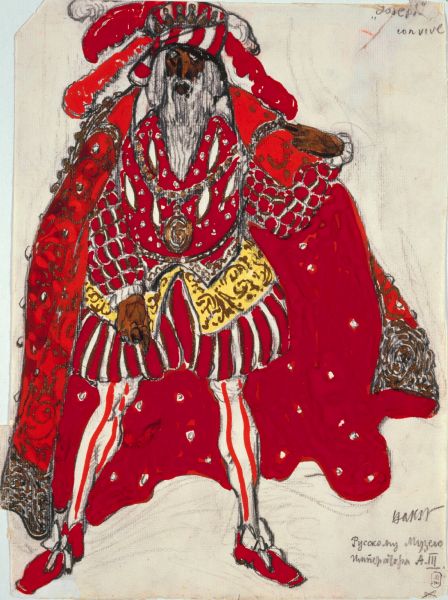 The Russian Seasons of 1909–1914 represented the triumphal march of Russian ballet across the theatres of Europe and the height of Léon Bakst’s creative talent as a stage set designer. He worked on designs of sets and costumes, wrote librettos and worked on ballet choreography. “Paris was drunk with Bakst,” recalled the expatriate Russian critic André Levinson. The ballet La L.gende de Joseph opened the 1914 Saison Russe in Paris. The Austrian composer Richard Strauss composed the ballet at the commission of Diaghilev and helped write the libretto. La L.gende de Joseph was based on Claude Debussy’s unrealized ballet Le Festin, put together by Alexander Benois in 1912. The glittering golden décor of the hall of Potiphar’s palace was the work of the famous Spanish artist José-Maria Sert. The costumes were commissioned from Bakst. Designed in the style of the Italian Renaissance, they were noted for their deep originality. “The splendour and luxury of the Oriental colours pass through a prism of the artistic contemplation of the world of the Renaissance,” said the artist. Contemporaries were attracted by the “pictures playing in hundreds of bright tones and gold”. The critics called the production “super-Veronesian”.
Bakst’s costumes were a bright pictorial sight. The silhouettes and vivid colours, founded on combinations of red, green, orange, lilac and black, caught the imagination of the public. The production employed an especially large number of red costumes, which lent the performance a special solemnity. An example of the latter is the costume of the Guest.

Bakst, Leon (Lev Samoilovich)
1866, Hrodno - 1924, Paris
Painter, graphic artist, theatrical designer. Studied at the Imperial Academy of Arts (1883-87) and the Atelier dc Jean Louis Gerome and Academic de Rodolphe Julian in Paris (1893-96). Taught at the Elizaveta Zwantseva School of Drawing and Painting in St Petersburg (1906-09). Member of the Society of Russian Waterecolourists (1891-1907), World of Art (1899-1903, 1906, 1913) and the Union of Russian Artists (1903-1910). Life member of the Salon d''''Automne (from 1906). Academician (1914). Contributed to many exhibitions of theatrical design and one-man shows. Designed sets and costumes for the Mariinsky Theatre and Alexandrinsky Theatre in St Petersburg, Paris Opera and theatres in London and New York. Leading designers of Sergei Diaghilev''''s Ballets Russes (from 1909) and the ballet companies of Anna Pavlova and Ida Rubinstein. Emigrated to Paris (1909).