View of the Moscow Kremlin from the Stone Bridge 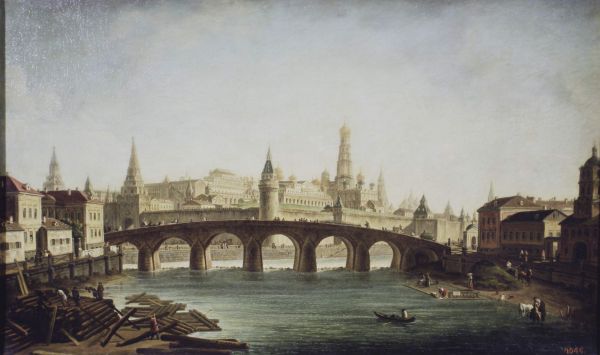 In 1800, with funds from the Imperial Cabinet, the artist Fyodor Alexeyev began work on a series of views of Moscow. This painting shows us one of the most entrancing panoramas that travellers would see when visiting the city. The majestic Kremlin, the massive stone bridge and the many old palaces and chambers squeezing in along the embankment were all a reminder of the time of the Kingdom of Muscovy. During Napoleon’s invasion of Russia in 1812 Moscow, which was occupied by the French, suffered an immense fire that caused irreparable damage to the city’s appearance. The picture is thus a historical document that allows us to get a visual impression of the ancient capital of Russia.

Alexeyev Fyodor. Square Before the Cathedral of the Dormition in the Moscow Kremlin