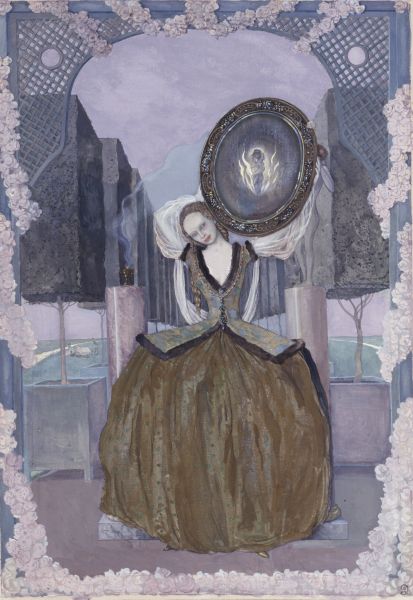 Konstantin Somov began work on Magic during his first trip to Paris, where he was invited by Alexander and Anna Benois. The French capital was at that time also home to Léon Bakst, Evgeny Lanceray and Anna Ostroumova-Lebedeva, later members of the World of Art. The city and its suburbs, its museums and antique shops, confirmed the young painter’s interest in the art of the “gallant” 18th century, which was shared by many World of Art members. Work on this gouache lasted for four years. The well planned composition is elegant, refined and balanced, though the image is somewhat aloof and affected. As Sergei Ernst, a famous critic of the late 19th and early 20th century, wrote: “It is thought that the art of Somov was born here, in this fantastic decoration, full of the fragrance of precious aromas. From here it was summoned to bewitch the world.”