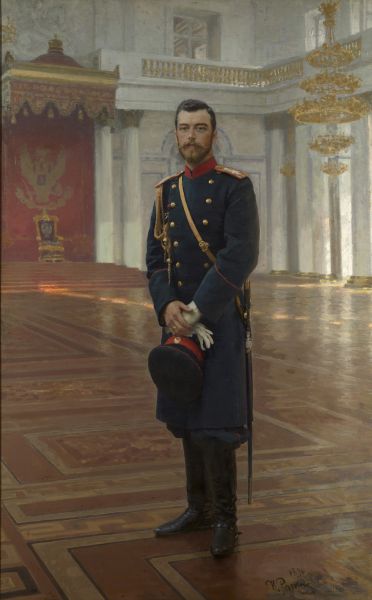 Nicolas II (1868–1918) was the last Russian Emperor, the son of Alexander III and Empress Maria Fedorovna. He ascended to the throne in 1894, and his enthronement gave way to numerous gossips about the upcoming liberalization. However, in his very first public speech he claimed: “Let it be known that I, while devoting all my efforts to the prosperity of my people, will guard the sovereignty of our monarchy as firmly and steadily, as my late father”. The reign of Nicolas II was marked by rapid economic development, flourishing cultural life, implementation of Stolypin’s agrarian reform, and foundation of the State Duma. However, a defeat in the Russo-Japanese War and aggravation of social conflicts led to the first Russian revolution of 1905. Russia’ further participation in the First World War as a part of the Entente brought on the second revolution in February 1917 and the Emperor’s abdication. After the October revolution the Emperor with his whole family was executed in Yekaterinburg. Thus, the prophesy of the great Russian historian V.O. Klyuchevsky and the insight of F. Engels turned out to be true – they both claimed that Crown Prince Alexei would never ascend the throne. Russian Orthodox Church canonized Nicolas, his wife, and five children as “the Royal Martyrs”.