Portrait of the Heir to the Throne Alexei Nikolayevich. 1911 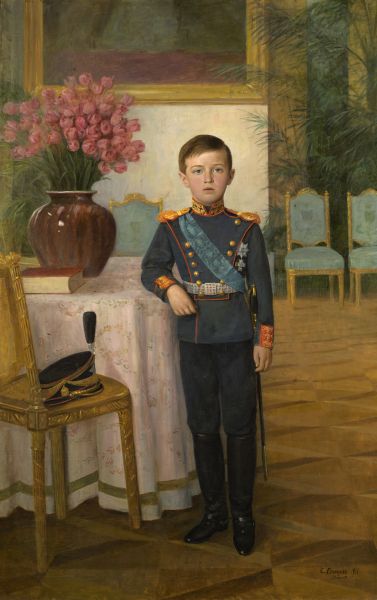 Tsesarevich Alexei Nikolayevich (1904–1918) was the only son of Nicholas II and Alexandra Feodorovna. He inherited hemophilia from the family of his mother, the granddaughter of Queen Victoria. His illness, which caused great suffering, is connected with the rise of the simple peasant Grigory Rasputin, who, it has been thought, was able to palliate the boy’s condition when his situation was critical. Upon his own abdication from the throne, Nicholas II, out of compassion for his sick son, also abdicated on his behalf. Alexei was shot on 17 July 1918 along with his parents, sisters, and servants in Ekaterinburg. He was canonised by the Russian Orthodox Church as a passion bearer. This portrait of the tsesarevich from Sergei Egornov’s brush is one of the best rarest painted images of Alexei that has survived to the present day.