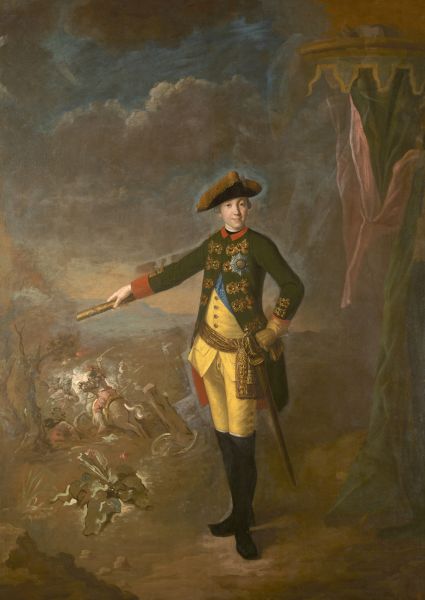 Peter III (Karl Peter Ulrich of Holstein-Gottorp, February 21, 1728, Kiel – 6/17 July 1762, Ropsha) – the son of Charles Frederick, the Duke of Holstein-Gottorp and Anna Petrovna, daughter of Peter I. In 1742 he was brought to St. Petersburg as the successor to the throne. By adopting Orthodoxy he got the name of Piotr Fyodorovich. In 1745 he married Sophie Auguste Friederike of Anhalt-Zerbst, the future Empress Catherine II. From 1761 he was the Russian Emperor, the first representative of the Holstein-Gottorp (Oldenburg) branch of the Romanov dynasty on the Russian throne. After a six-month reign he was overthrown in a palace coup (1762) that enthroned his wife Catherine II. He died in the Ropsha palace under mysterious circumstances. He reigned from 25 December 1761/5 January 1762 to 28 June / July 9, 1762.
Peter III is depicted in the uniform of the Life Guards of the Preobrazhensky regiment with the Order of St. Andrew (ribbon and star).
Bad preservation of the portrait ( due to the fact that the paint layer was transferred from the author’s canvas to the new one, there can be seen multiple tinting and writings) does not allow to draw a final conclusion about its authorship. Dated 1762 (?). It was dated according to the uniform that was introduced at the beginning of 1762 and canceled in the same year; as well as on the basis of fact that, in April 1762, Peter III gave Rokotov a session.