Ceremonial Consecration of the Alexander Column on Palace Square in St Petersburg on 30 August 1834. 1830s 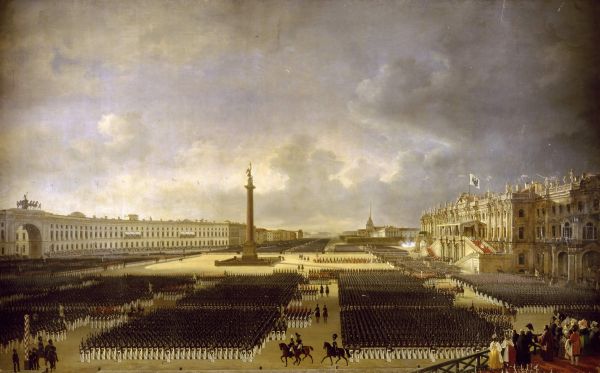 The parade on the occasion of the ceremonial consecration of the Alexander Column began 30 August 1824 at 11 o’clock in the morning with Emperor Nicholas I inspecting the troops. At 12 o’clock, after Empress Alexandra Feodorovna came out onto the balustrade that had been specially constructed on the second level of the Winter Palace, there was a prayer service with genuflection, with a proclamation for many years of the rule of the imperial dynasty and the eternal memory of Emperor Alexander I. With the protodeacon’s last words, the curtain covering the column fell, revealing the column to the many spectators. At one o’clock, the troops began a ceremonial march past the monument. The guard went first in the ceremonial march, and they were followed by the grenadiers. After the grenadiers came the military academies, then the army infantry, the walking artillery, the cavalry, the mounted artillery, and the mounted pioneer squadron. In Adolphe Ladurner’s painting, one can see the specially equipped places for the spectators on the corners of Nevsky Prospect, around the General Staff Building, and along the front façade of the Exercise House (the Guard Corps Staff Building now stands in its place).

Ladurner, Adolphe Ignatyevich
1799/1800?, Paris? – 1855, St Petersburg
French battle painter, lithographer, portraitist. Son of the German pianist and composer Ignaz Ladurner (1766–1839). Studied art under OrasVernet in Paris. Exhibited at the Salon in 1824 (The Battle of Matarу) and in 1827 (Headquarters of King’s Lancers). Worked in Warsaw and Dresden; in Russia from 1831. Author of numerous battle scenes, parades and regimental ceremonies. Was under the protection of Nicholas I. Academician of the Imperial Academy of Arts (1837), third-class professor (from 1840). Awarded the Order of St Stanislaus 3rd Class for drawings of uniforms of the Russian Army (1844). Served as an artist at the Editorial Office of the Russian Military Chronicles. Commissioned by Emperor Nicholas I to create a series of paintings (more than 40) of a single format (68 х 97) depicting guard regiments for the Russian Guards collection, which then were lithographed and printed on porcelain vases and plates. Active participant in annual academic exhibitions.