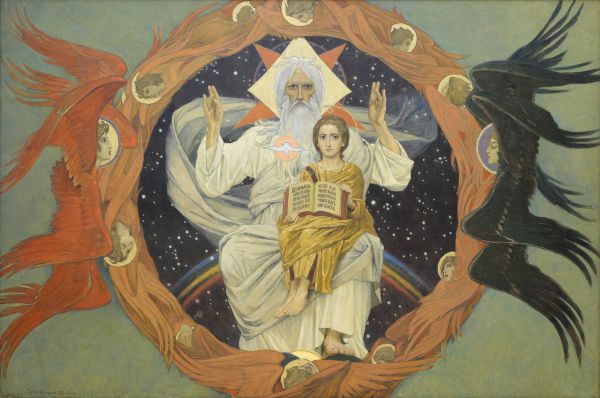 Design for a mosaic for the St Alexander Nevsky Cathedral in Warsaw
The foundation for an Orthodox cathedral in the name of one of the patrons of the House of Romanov, Alexander Nevsky, was laid in the centre of Warsaw. The cathedral was designed by Leon Benois and had its ceremonial opening in 1912. Leading Russian artists, including Viktor Vasnetsov and Andrei Ryabushkin, took part in designing the cathedral, which was notable for the wealth and variety of finishes. The cathedral was demolished in 1924–1926 as a symbol of Russian rule in Poland, and surviving fragments of the décor ended up at Orthodox churches in Poland and Belarus. The canvas Fatherhood, with an image of the Holy Trinity, done by Viktor Vasnetsov as a design for a mosaic, later destroyed, gives us an idea of the monumental church style of the last two Romanovs, in which traditional academic forms are combined with Art Nouveau.

Vasnetsov, Victor Mikhailovich
1848, Lopial (Vyatka Province) -1926, Moscow
Painter, author of pictures on themes of Russian history and folklore, genre artist, portraitist, theatrical designer. Studied under Nikolai Chernyshev at the Vyatka Theological Seminary (1860s) and under Ivan Kramskoi (1867-68), Pyotr Basin (1868-75, with intervals), Vasily Vereschagin and Pavel Chistyakov at the School of Drawing, Society for the Encouragement of Artists. Contributed to exhibitions (from 1869). Member of the Abramtsevo circle (from 1881). Visited Paris (1876-77) and Italy (1885).