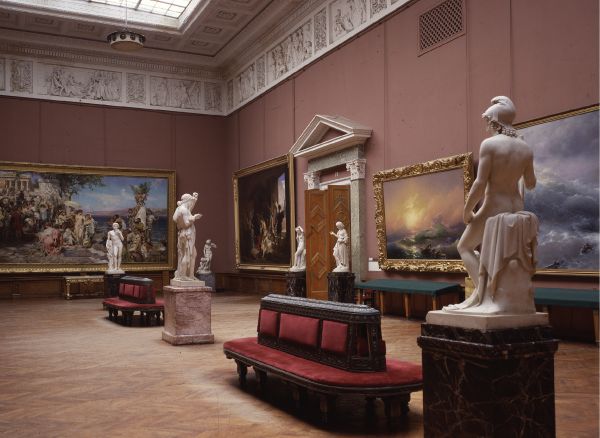 The Russian Museum is the first state museum of Russian fine arts in the country. It was established in 1895 in St Petersburg by a decree of the Emperor Nicholas II. Its grand opening for visitors occurred on March 19 (March 7, the Old Style) 1898.

The Russian Museum today is a unique depository of artistic treasures, a famous restoration centre, an authoritative institute of academic research, one of the major cultural and educational centers in Russia, and a research and instructional centre of art museums of the Russian Federation, overseeing activities of 260 art museums in Russia.

The Russian Museum collection contains more than 400.000 exhibits. The main complex of museum buildings - the Mikhailovsky Palace and Benois Wing - houses the permanent exhibition of the Russian Museum, tracing the entire history of Russian art from the tenth to the twentieth centuries. The museum collection embraces all forms, genres, schools and movements of art.

Over the past twenty years, the museum complex has grown to include the Stroganov Palace, St Michael''s (Engineers) Castle and the Marble Palace. The complex also includes the Mikhailovsky Gardens, Engineering Gardens, Summer Garden (including the Summer Palace) and the House of Peter the Great.

The main building of the Russian Museum, is situated on the Square of Arts in the centre of the city. Built to the design of the celebrated architect Carlo Rossi between 1819 and 1825, the palace is a masterpiece of Russian Neoclassical architecture. The Palace was named after Grand Duke Mikhail Pavlovich — the fourth son of the Emperor Paul I. In 1895 the building was acquired by the crown and granted to the Emperor Alexander III Russian Museum. In 1895-98 inner premises of the palace were rebuilt and adjusted for the museum. The project was made by the architect Vasily Svinin.

As the collection increased in 1914—1919 the Exhibition Pavilion of the Academy of Art was built according to the project of Leonty Benois and S. O. Ovsyannikov. It was called the Benois Wing.

The Stroganov Palace is a unique monument of 18th-century architecture. There are two principal periods in the history of the building. The first period is connected with the architect Mikhail Zemtsov, who began the construction in the early 1740s. From 1753, the work was continued by the more famous architect Francesco Bartolomeo Rastrelli who turned the building into a palace in the Baroque style, keeping the original foundation and main walls of the Zemtsov edifice. The palace’s exterior has remained nearly unchanged since that time. This is the three-storey building with facades facing Nevsky Prospekt and the Moika River. The centers of these facades are distinguished with columns supporting a complexly formed entablature, while the Stroganov Coat of Arms crowns the composition.

Among the interiors designed by Rastrelli the Large (Ball) Room decorated with stuccowork and a plafond by Giuseppe Valeriani has been preserved with little alteration. Later on, many famous St Petersburg architects worked in the palace. The most essential reconstruction is attributed to Andrei Voronikhin, who designed the Grand Staircase and Dining Room, Mineral Study, Picture Gallery and Physics Study from 1790 to 1800. This was the second important period in the history of the building.

The Stroganovs were collectors, patrons and benefactors who made invaluable contributions to Russian culture. The most famous representative of the dynasty was Alexander Stroganov (1737–1811), who was a collector of Western European painting and applied art, a benefactor of artists, literary men and composers, the president of the Imperial Academy of Arts and the director of the Public Library. The most important achievement of his life, however, was the construction of the Kazan Cathedral (architect Andrei Voronikhin.) 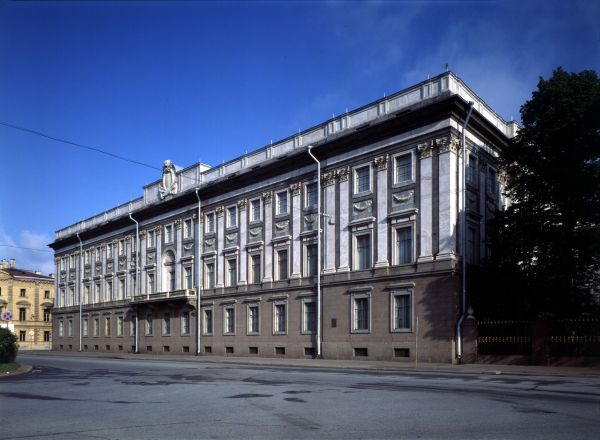 The palace is an outstanding sample of early Neoclassicism in Russia. Built to the design of the architect Antonio Rinaldy between 1768 and 1785, the palace was commissioned by Catherine the Great. The architect first ever in Russia extensively used granite and various species of marble for decoration of facades and interiors of the palace. Thus later the palace got the name of the Marble Palace.

First the palace was built as a present for Count Grigory Orlov, the favorite of Catherine the Great. However, Grigory Orlov had died before the construction was completed. After his death the palace was a residence of the Grand Dukes. One of its latest owners was Grand Duke Konstantin Konstantinovich. The memorial museum of the recognized poet of the Silver Age Konstantin Romanov (K.R) is located on the ground floor of the palace in the former chambers of the Grand Duke and in the original interiors of that time.

In 2001 the Rzhevsky Brothers Collection permanent exhibition, a gift to the State Russian Museum, was opened in the Marble Palace. In 1994 the equestrian statue of Alexander III was placed in front of the palace. The sculpture of the statue was Pavel Trubetskoi.

In 1995 the Ludwig Museum in the Russian Museum permanent exhibition was opened in the Marble Palace. It was donated by famous German collectors Peter and Irene Ludwig and displays works by European, Russian and American artists. The Ludwig Museum in the Russian Museum is the only permanent exhibition of art of the late 20th century that allows us to trace the development of Russian art in the context of world art culture.

After restoration, the Foreign Artists in Russia permanent exhibition was opened in the halls of the Marble Palace. It shows works by German, Italian, French and other European artists and sculptors who influenced the development of Russian art of the 18th — first half of the 19th centuries.

The castle was designed by Vincenzo Brenna and Vasily Bazhenov (1797-1801) as a parade residence for the Emperor Paul I. The Emperor himself added to the project. It is named after St Michael the Archangel (patron saint of the House of Romanov). This is the only palace building in Russia in the style of romantic classicism.

After the assassination of the Emperor Paul I (on the night of the 11th/12th of March 1801) the castle became the property of the Ministry of the Imperial Court. In February 1823 St Michael''s Castle was presented to the Central College of Engineering and was renamed the Engineers Castle.

A time of vast upheavals came to St Michael''s Castle in the 1990s. In 1994, the building was officially awarded to the Russian Museum. A major reconstruction programme was announced, aimed at restoring the original decor and architecture.

Three of the facades and the adjoining gardens have now been fully restored. Part of the original Resurrection Canal has been recreated. The Chapel of St Michael the Archangel, the private apartments of Grand Duke Nicholas Pavlovich and Grand Duke Konstantin Pavlovich, the Main Staircase, the Antique Room, the Raphael Gallery, the Dining Room and the Empress Marie Fyodorovna Throne Room have all been restored to their former glory. They now host exhibitions of art from the collection of the Russian Museum — many of them repeating the dreams and ideas of the original owner of the palace, Tsar Paul. 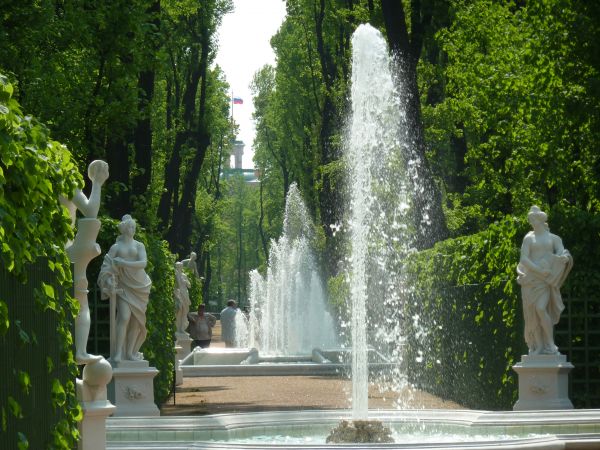 The Summer Garden with its collection of sculpture and the Summer Palace, the first emperor summer residence, form a single museum complex. The Garden was Peter the Great´s favourite creation. It was started in 1704. The Garden has changed greatly through the ages. However, its original regular planning has been completely preserved till nowadays.

Summer Palace of Peter the Great 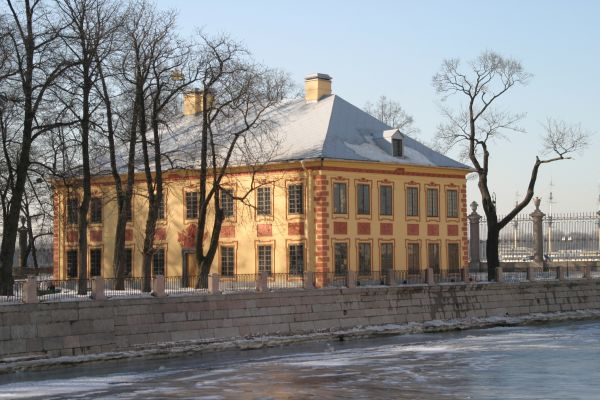 The Summer Palace in the north-east corner of the garden was built by Domenico Trezzini between 1710 and 1712. Andreas Schluter and Georg Johann Mattarnovi sculpted the decor on the facades. The twenty-nine bas-reliefs between the windows on the ground and first floors depict, in an allegorical form, the Russian victories over Sweden in the Great Northern War. On the ground floor the quarters of Peter I, and on the first floor the quarters of his wife Catherine were located.

In 1924, the Summer Palace was turned into a museum of everyday objects from the early eighteenth century. Several generations of curators carefully preserved the original purposes of each palace room and the exhibits relating to the life of Peter the Great and the Imperial family.

The territory of the modern Mikhailovsky Garden at the time of Peter the Great belonged to the so-called third Summer Garden, also known as the Swedish garden.

Having laid Sadovaya street to the Field of Mars, Rossi defined the configuration of the palace garden. Its eastern edge was accentuated by the spear-shaped railing, the western ran parallel to the Catherine Canal (now Griboyedov Canal), the southern was closed by the palace façade, and the northern edge of the garden was closed by the bank of the Moika River. In front of the garden façade of the Mikhailovsky Palace there was a spacious meadow of an uneven oval form, framed with groups of rampant trees. The architect created a landscape garden typical for Classicism, but had carefully preserved its Baroque pond, decorating it with relief cast-iron bridge. According to the same project a pavilion with granite quay edged by a laced cast-iron railing was built at the bank of the Moika River.

In 19th – early 20th centuries the Mikhailovsky Garden was a place for holding various fêtes. After the revolution of 1917 the garden was turned into a park for the city-dwellers.

In 1999 the Mikhailovsky Garden was handed over to the Russian Museum.

Cabin of Peter the Great 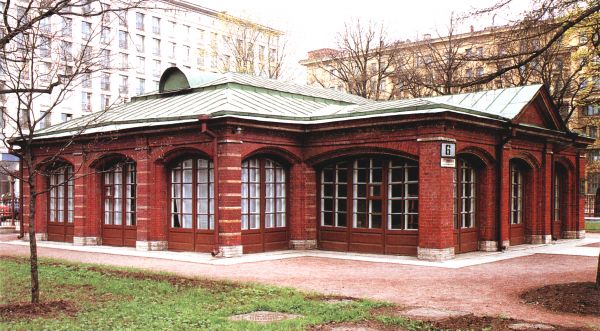 After the foundation of the Peter and Paul Fortress, Peter I ordered to build a house not far from it. The Cabin of Peter the Great was built from pinewood during 3 days: between 24 and 26 May 1703. The house did not have a stone foundation, it stood on the ground. The area of the building was 60 m2. On the roof of the building there were a wooden mortar and a “flaming” ball indicating that the house belonged to a “captain of the bombardier company”. During Peter the Great’s staying at the house the tsar’s colour with a double-headed eagle streamed on a high flagstaff.

Peter I lived in the Original Palace between 1703 and 1708 in warm seasons, most likely during military operations that became more intense in spring, summer and autumn.

In 1723 in honour of the capital’s jubilee by personal order of Peter I, the house was surrounded by a protective stone gallery to preserve it for the future. The works were carried out by the chief architect of St Petersburg Domenico Trezzini who was the author of the project. Nevertheless, periodic floods were destroying the gallery; and in 1784 a new construction on the foundation of the old one was built, repeating its architectural forms.

In 1930 the Cabin of Peter the Great State Museum opened in the Original Palace. The restoration carried out by the architect Alexander Hessen in 1971–1975 approximated the cabin to its original design.

In 1999 the historical planning of the area and railings of the outer garden were recreated; inner railings with recreation of all lost details and original colouring were restored. In 2004 the Cabin of Peter the Great formed part of the architectural and artistic complex of the State Russian Museum.