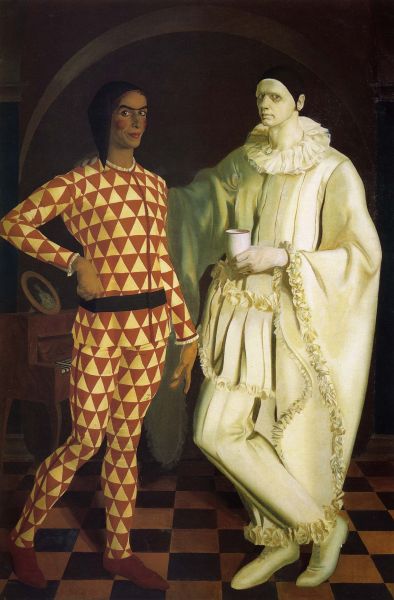 Vasily Shukhayev and Alexander Yakovlev were the representatives of Neoclassicism in the World of Art. Harlequin and Pierrot resurrects the form of the classical portrait, with its academically distinct drawing, chiaroscuro modelling of form, local colours and textureless application of the paint. In the early 1910s, the two artists performed in Arthur Schnitzler’s pantomime Colombine’s Scarf at the House of Interludes in St Petersburg. Yakovlev played the part of Harlequin and Shukhayev was Pierrot. This double self-portrait records their interest in the theatre. For a long time, the picture was unfinished and therefore not exhibited.
In 1962, Shukhayev finally completed several details and the painting was exhibited that same year at his one-man show at the Academy of Arts in Leningrad.