Election of Michael Romanov as Tsar. 1859 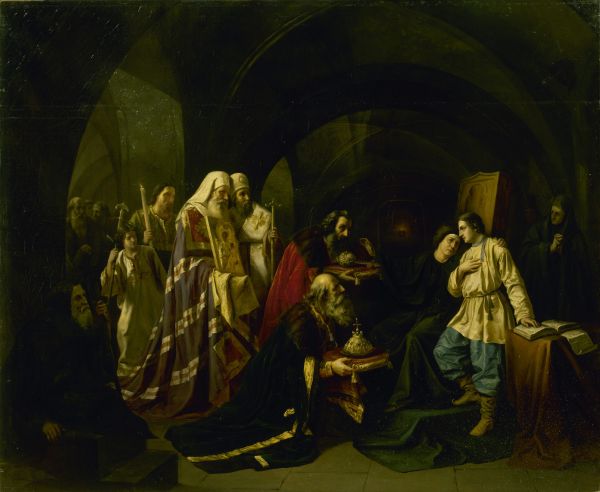 On 21 February 1613 the Zemsky Sobor that had been called to choose a new tsar announced the election to the throne of Michael Romanov, the great-nephew of the last of the Ruriks, Feodor Ioannovich. Immediately afterwards a delegation set out for the Ipatyev Monastery in Kostroma, where Michael was living with his mother, with the task of announcing to him his election and presenting him with the Oath of the Assembly, the Zemsky Sobor’s concluding document. According to the official account the newly-elected monarch hesitated for a while but was eventually persuaded to take on the heavy burden of power. In the descriptive and naturalistic manner that was typical of his period of study at the Imperial Academy of Arts, the artist Nikolai Shustov has given the subject a low-key treatment. We can see the low vaults of a monastic cell under which the artist has depicted the delegation of boyars and clergy offering the royal regalia and proposing to the embarrassed youth that he should accept the throne.

Shustov, Nikolai Semyonovich
1834 (1835), St Petersburg – 1868, St Petersburg
Painter. Studied at the Imperial Academy of Arts (1855–1863). One of the founding members of the St Petersburg Artel of Artists (1863), where he was responsible for obtaining commissions and finance matters. Academician (1865).