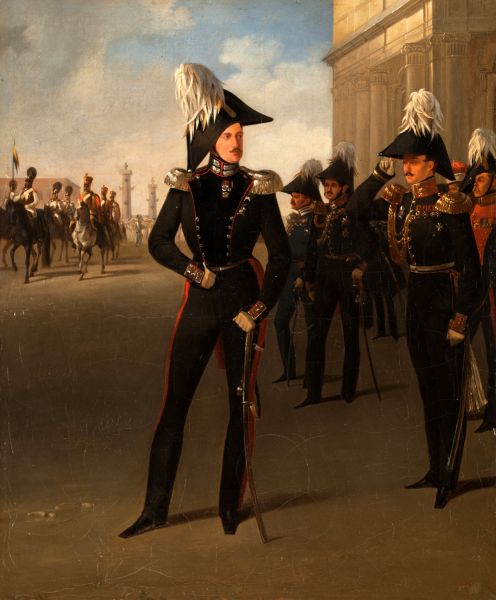 Nicholas I, like his father, Paul I, had a passion for military affairs, and paid extreme attention to the order and discipline of the military. Military service, both in the armed forces and at Court, was strictly regulated in terms of appearance of rituals. Frequent parades and reviews, daily reports from the generals on duty, and the changing of the guard took up a significant portion of Nicholas’s working hours. In all of this, the unique aesthetic reflected the conservative and militaristic spirit of Nicholas’s era. Adolphe Ladurner’s painting depicts an episode in the life of the Court where the emperor is accepting a report from his adjutant general. Nicholas is depicted in the uniform of the Life Guards of the Sapper Battalion, with a badge honouring his “15 Years of Irreproachable Service”, received in 1828.

Ladurner, Adolphe Ignatyevich
1799/1800?, Paris? – 1855, St Petersburg
French battle painter, lithographer, portraitist. Son of the German pianist and composer Ignaz Ladurner (1766–1839). Studied art under OrasVernet in Paris. Exhibited at the Salon in 1824 (The Battle of Matarу) and in 1827 (Headquarters of King’s Lancers). Worked in Warsaw and Dresden; in Russia from 1831. Author of numerous battle scenes, parades and regimental ceremonies. Was under the protection of Nicholas I. Academician of the Imperial Academy of Arts (1837), third-class professor (from 1840). Awarded the Order of St Stanislaus 3rd Class for drawings of uniforms of the Russian Army (1844). Served as an artist at the Editorial Office of the Russian Military Chronicles. Commissioned by Emperor Nicholas I to create a series of paintings (more than 40) of a single format (68 х 97) depicting guard regiments for the Russian Guards collection, which then were lithographed and printed on porcelain vases and plates. Active participant in annual academic exhibitions.