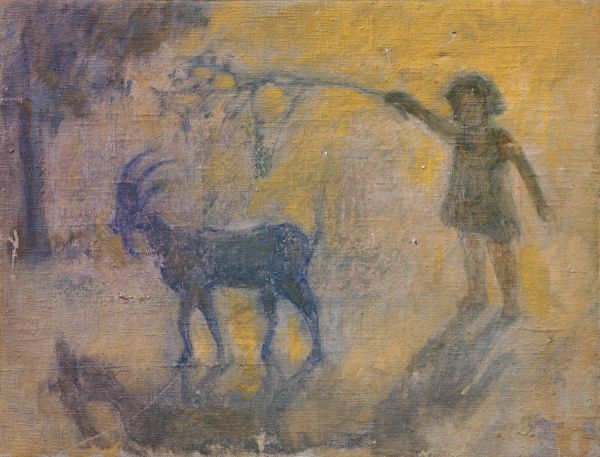 The subject of this study-like painting dates back to folkloric images in Jewish culture. Among these, the goat occupies an important place. It could well have been inspired by the artist’s own life in Vitebsk and its surroundings, an area she never went back to after her departure from Moscow in 1921. The work came from the artist's nephew, and the exact date it was painted is unknown. In any case, it has features characteristic of the Vitebsk school, which is where Elena Kabishcher started out shortly after finishing college. The depiction of national motifs and stories was key to Yehuda Pen, whose school had an enormous influence on art in Vitebsk during the late 19th and early 20th century.

The painter, Elena Kabishcher-Yakerson studied at Yehuda Pen’s school of drawing and painting in Vitebsk and at Vitebsk School (1919–1920). She took part in exhibitions of Pen’s students in Vitebsk, before moving to Moscow in 1922, where she lived with her husband, the sculptor David Yakerson. She gave up painting in later years.