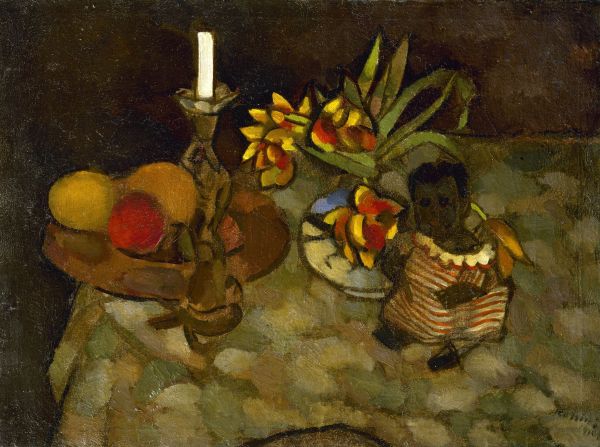 Painter, graphic artist, sculptor, musician, and theorist of colour music, Vladimir Baranoff-Rossiné studied for one year at the Odessa School of Art, then the Higher School of Art, Imperial Academy of Arts from 1903 to 1907 and for three further yearsat a private studio in Paris. He contributed to exhibitions from 1907 onwards, including Salon d’Automne (Paris, 1913) and Salon des Indépendants (Paris, 1913, 1925–1942). During the early 1910s he worked in Paris before moving to Scandinavia in 1915, then back to Russia two years later. In 1919, he joined IZO Narkompros in Petrograd, and held positions as professor and dean at the Higher Art and Technical Studios in Moscow during the early 1920s. His first optophonic concerts were held at the Vsevolod Meyerhold Theatre and the Bolshoi Theatre in Moscow in1923. Heemigrated to Paris two years later, where he developed the plastic principle based on the Möbius strip. Baranoff-Rossiné died during World War II in a concentration camp.