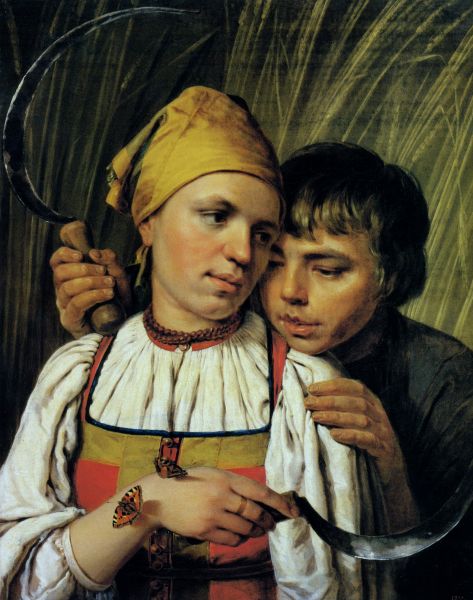 In the late 1820s, while continuing to create small works close in character to life studies, Alexei Venetsianov began to increasingly turn to the creation of large canvases with more generalized images. Among such pictures is Reapers, created during the heyday of the master’s professional career and one of his finest works. The picture is, in essence, one of the many genre portraits in Venetsianov’s creative heritage. The most impressive features of this canvas are its profound characteristics and special expressiveness. The artist incarnates the power and beauty of a directly manifested feeling with a seriousness and sincerity far removed from sentimentalism. This was a typical feature of Romantic art, which often endowed its heroes with genre characteristics.

Venetsianov, Alexei Gavrilovich
1780, Moscow - 1847, Poddubie (Tver Province)
Founding father of Russian peasant genre painting. Painter, portraitist, etcher, lithographer. Son of a Moscow merchant, educated at private boarding school, worked as a draughtsman. Moved to St Petersburg (1802) and worked as a land surveyor for the crown properties and forestry departments. Studied painting independently, copied works in the Imperial Hermitage and drew pastel portraits. Academician (1811). Resigned from the civil service, moved to the country and painted genre scenes from life (early 1820s). Exhibited at the Imperial Academy of Arts and the Society for the Encouragement of Artists. Had many students, who formed the Venetsianov school in Russian art. Killed in a road accident at the Milyukov estate.