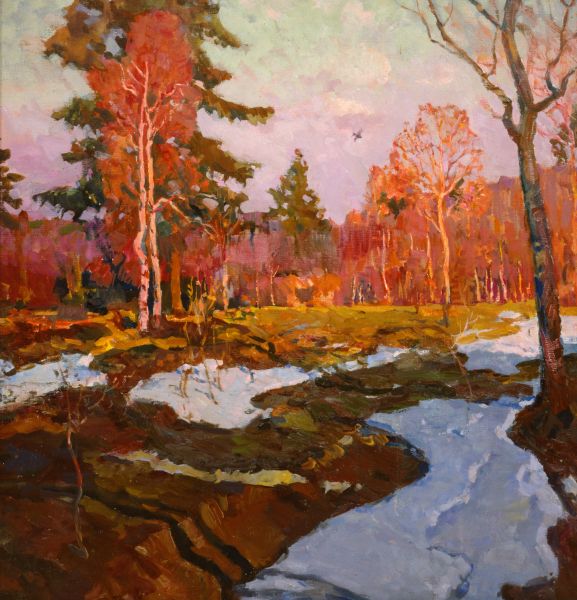 This canvas by Polyushenko is full of spring music — in the shadows on the melted snow, in the trembling young shoots of birch trees, in the gentle mist shrouding the treetops. Winter’s last gasp is conveyed by the painter in the clash of warm and cool tones that permeate the canvas.

Polushenko, Andrei Petrovich (1911, Korennaya, near Voronezh — 1985, Mytishchi, Moscow Region)
Painter, landscapist. Studied at S. P. Sokolov’s studio in Nizhny Novgorod (1926–1930). Contributed to exhibitions (from 1935). During WWII headed propaganda poster studio in Gorky (Nizhny Novgorod). Lived near Moscow (from 1949). Honoured Artist of the RSFSR (1965), Merited Art Worker of the RSFSR (1975). Winner of the Ilya Repin State Prize for a series of landscapes of Moscow environs (1981). People’s Artist of the RSFSR (1981).