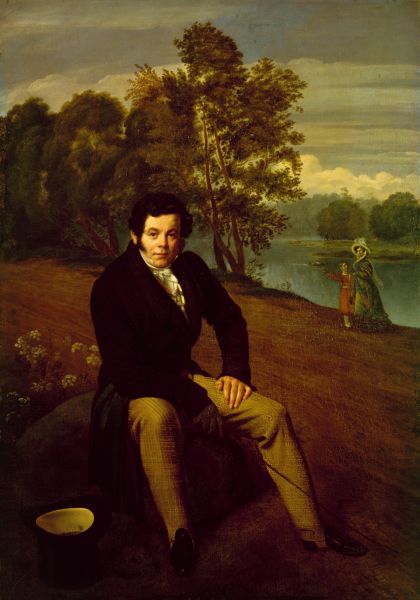 Received in 1903 from A. P. Albrecht Provenance: collection of the depicted person s family
Albrecht, Karl Ivanovich (1789–1859) was the descendent of a native of Prussia, Ludwig von Albrecht. He began his military service of the Life-Guards Hussar Regiment, where in 1806 he was promoted from cadet to cornet, and in January 1812 to captain. In July 1812, he was seriously wounded in a battle near Vitebsk, and for his distinction in battle, he was promoted to colonel. In1817, he was made commander of the Polish Lancers. In the painting, Albrecht is shown at his estate, Kotly, in the Yamburg District of the Petersburg Region. He is depicted with the Prussian Order of the Red Eagle, Third Class, which he was awarded in 1814 (white enamel cross on a white ribbon with a orange border around his neck). Far away, in the park, is his first wife, Varvara Sergeevna, with son Alexander (1820–1849).