Portrait of the Writer and Musician Princess Zinaida Alexandrovna Volkonskaya, née Princess Beloselskaya-Belozerskaya (1879–1862), Dressed as Tancred (from the Opera by G. Rossini). Not before 1820 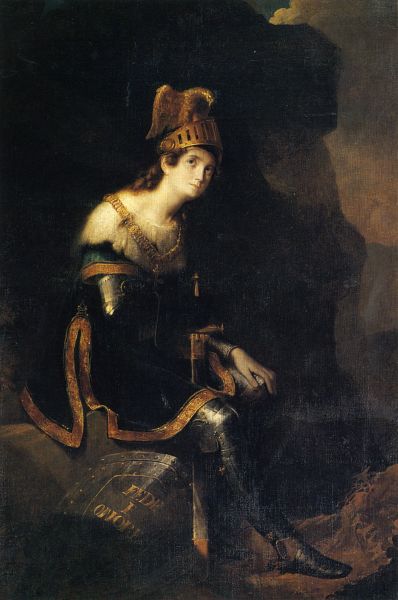 The picture was received by the museum in 1926 from the Bureau of the department for the protection and registration of artistic items and antiquities (Leningrad).
This image of Z.A. Volkonskaya cannot be called a state portrait in a strict sense, as the work by Bruni lacks its obligatory representationalism. The image is very romantic due to a fantastic costume, armor and a helmet, a wild landscape with rocks, and a note of contemplative loneliness and longing. Volkonskaya is not posing, she is dreaming, lost in her thoughts. The state of the model is expressed via excellent colours selection”: all shades and tones seem to glimmer, to flash and then go back to darkness. The princess is wearing a costume of Tancred, a hero of an eponymous opera by G. Rossini. The opera was performed in Volkonskaya’s salon. This character that combines heroism and faith, love and commitment, contemplation and decisiveness, was created by Torquato Tasso.

Zinaida Alexandrovna Volkonskaya, born Princess Beloselskaya-Belozerskaya (1789–1862) was the wife of Master of the Hunt Prince N.G. Volkonsky, a writer, a musician, and a member of the Russian Language Lovers Society and the Society of History and Antiques. Since 1824 she had been living in Moscow, and her house had been always open for famous scientists and writers. In 1829 she moved to Rome, became a catholic, and was beatified after death. In 1826 the Princess sent her lithographic portrait in the image of Joan of Arc (a copy after a picture exhibited in the Russian Museum) to A.S. Pushkin and specified that it was made “ after Bruni” (d'apres Bruni).

Bruni, Fidelio (Fyodor Antonovich)
1801, Milan -1875, St Petersburg
Painter, engraver, author of religious and history compositions, portraitist. Son of the painter and sculptor Antonio Baroffi-Bruni. Moved to Russia with his father (1807). Studied under Alexei Yegorov, Andrei Ivanov and Vasily Shebuyev at the Imperial Academy of Arts (from 1809). Graduated with a first-class degree (1818). Moved to Rome to con¬tinue his art education (1819). Returned to Russia and painted portraits and icons for churches and cathedrals in St Petersburg and environs (1835-38). Lived and worked in Rome (1838-43, 1843-45). Honorary member of the Academies of Art of Bologna and Milan, professor of the Florentine Academy of Arts and St Luke''s Academy in Rome. Taught at the Imperial Academy of Arts (1836-38, 1846-71). Second-class professor (1836), first-class professor (1846), rector of painting and sculpture (1855-71). Curator of the Imperial Hermitage picture gallery (1849-64), headed the mosaic studio at the Imperial Academy of Arts (from 1866