Portrait of Sergei Diaghilev and his Nanny. 1906 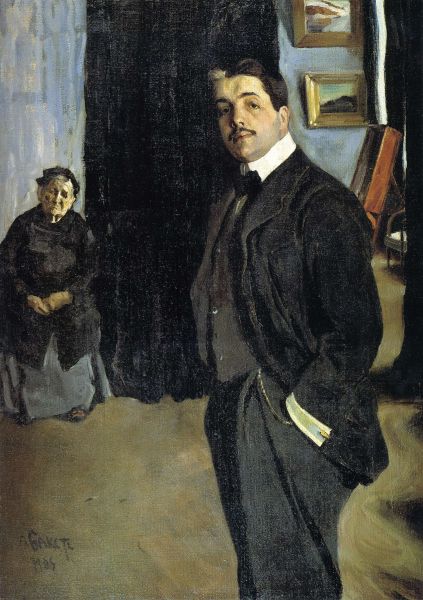 One of Léon Bakst’s most outstanding works of portraiture, Portrait of Sergei Diaghilev and his Nanny is, perhaps, the most famous image of the legendary Russian impresario, who was a close friend of the artist. Diaghilev’s slightly fastidious pose, raised eyebrows and appraising glance betray a self-confident and authoritative personality. The figure of the old nanny sitting in the corner was a typical feature of the way of life of the old Russian nobility.
Contrasting the figure of Diaghilev, she offers a clearer insight into the personality of the sitter — a former provincial whose energy and talent helped him to not only conquer the Russian capital, but the whole of Europe as well.

Sergei Pavlovich Diaghilev (1872–1929) was one of the central figures of fin-de-siècle cultural life in St Petersburg. Before launching the Saisons Russes in Paris, he founded and published the World of Art (Mir iskusstva) magazine (1898–1904), curated a series of important art shows and wrote articles on art and the theatre.

Bakst, Leon (Lev Samoilovich)
1866, Hrodno - 1924, Paris
Painter, graphic artist, theatrical designer. Studied at the Imperial Academy of Arts (1883-87) and the Atelier dc Jean Louis Gerome and Academic de Rodolphe Julian in Paris (1893-96). Taught at the Elizaveta Zwantseva School of Drawing and Painting in St Petersburg (1906-09). Member of the Society of Russian Waterecolourists (1891-1907), World of Art (1899-1903, 1906, 1913) and the Union of Russian Artists (1903-1910). Life member of the Salon d''''Automne (from 1906). Academician (1914). Contributed to many exhibitions of theatrical design and one-man shows. Designed sets and costumes for the Mariinsky Theatre and Alexandrinsky Theatre in St Petersburg, Paris Opera and theatres in London and New York. Leading designers of Sergei Diaghilev''''s Ballets Russes (from 1909) and the ballet companies of Anna Pavlova and Ida Rubinstein. Emigrated to Paris (1909).