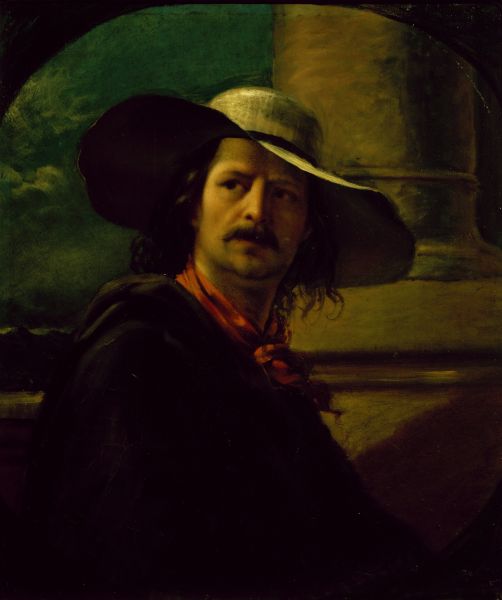 This painting is very typical of portraits of the Romantic era. The uneasy contrasts of light and shade introduce into the self-portrait a hint of the subject''''s emotional liveliness and unstable psychological state.

Maikov, Nikolai Apollonovich
1794, Moscow ‒ 1873, St Petersburg
Amater artist. Painter, portraitist, author of compositions on historical subjects. His father was Apollon Maikov, the interim director of the Imperial Theatres. Studied at the Second Corps of Cadets (from 1801), graduated as an army field officer (1811). Fought and was injured at the Battle of Borodino. In 1821, he retired with rank of major of the Hussar Prince of Orange regiment. Did not receive a systematic artistic education; painted on his own. Lived in Moscow, and then moved to St Petersburg (1834). Enjoyed the patronage of Nicholas I. By order of the emperor, the Council of the Imperial Academy of Arts gave Maikov the rank of Academician for his altarpiece in Trinity Cathe¬dral (1835). Maikov painted numerous icons for churches in St Petersburg, Moscow and the provinces, as well as portraits and female heads and figures. In the 1840s and 1850s, Maikov''''''''s home in St Petersburg was the centre of a literary circle; guests included Ivan Goncharov, Nikolai Nekrasov, Ivan Panaev, Ivan Turgenev, Dmitry Grigorovich and Fyodor Dostoevsky.